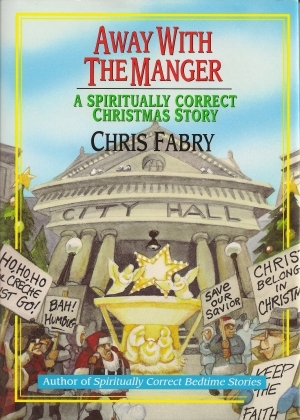 Away With the Manger

It began with a letter. Jackson Grim, newspaper columnist, was wading through his usual pile of hate mail from gun owners, religious wackos and fans of a political talk show when he found it. The letter writer regretted the decision of the Hartville City Council to ban a manger scene on the front lawn of City Hall unless other "Winter Holiday" symbols (Santa, reindeer, snowpersons) were included in the display. Though he was not a religious man himself, Jackson decided to print the letter in his column—a decision he quickly came to regret.