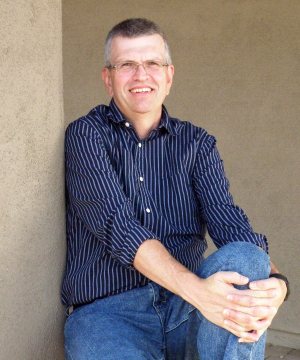 One of the finer moments of an author’s life is holding a book that previously was only a thought in the head or words typed on a computer, and I’m proud of this one for many reasons. The biggest one is that I think it’s going to help many people who are floundering in life.

The book is about Drew Brees, quarterback for the New Orleans Saints, Super Bowl winner, husband, father. I was asked by Tyndale House Publishers to help tell his story and felt uniquely called to do so. Let me explain.

Drew had a devastating shoulder injury on December 31, 2005. The comeback from that injury and his move from San Diego to New Orleans was an odyssey that seems orchestrated by more than the front office of the Saints. There were so many things at work that caused all of the negatives of his life to be turned to positives. It’s a gritty, real-life drama that encompasses excruciating physical and emotional pain, divorce, suicide, and the ups and downs of the NFL.

The book is titled Coming Back Stronger: Unleashing the Hidden Power of Adversity. When I first heard his story, I was struck with how Drew and his family handled all the difficulties they faced and how they threw themselves into the lives of hurting people. I was also struck with the odyssey my own family had been through and how much we feel the events of the past few years have not defeated us, but are making us ready for new challenges. Because of this, I felt uniquely qualified to help Drew tell his story.

I sat down with Drew in early March of 2010 to begin work on the book. On our last night in New Orleans, knowing I love seafood, he brought 4 dozen charbroiled oysters for dinner and yea verily, we did pig out. I am not kidding. I had two dozen oysters and could have eaten another dozen. They were that good. 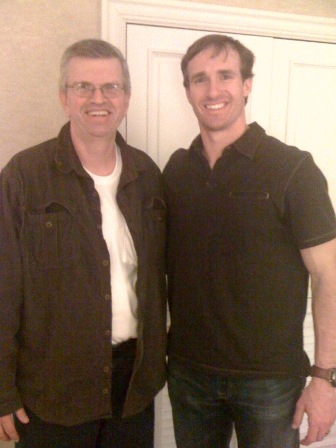 (See our picture from that night together. We are both full of oysters. In case you can’t tell, I’m the one without the birthmark.)

Drew was dedicated to telling the story well, the good and the bad, and helping readers where they are. He took an intense interest not just in giving interviews, but also in crafting the chapters so that the information was correct and made you feel like you were right there in the huddle with him. He wanted a person who has no interest in the NFL to enjoy the read, but he also wanted football fans to get a glimpse behind the curtain and feel like they were part of the action.

Coming Back Stronger is not just another sports book. It’s a life book. I don’t promise that you will become a Saints fan after reading it. Loyalties run deep in the NFL. But I think you will become a fan of Drew Brees and learn where he gets his strength.

When a potentially career-ending shoulder injury left quarterback Drew Brees without a team—and facing the daunting task of having to learn to throw a football all over again—coaches around the NFL wondered, Will he ever come back? After Hurricane Katrina devastated New Orleans, leaving more than 80 percent of the city underwater, many wondered, Will the city ever come back? And with their stadium transformed into a makeshift refugee camp, forcing the Saints to play their entire 2005 season on the road, people questioned, Will the Saints ever come back? It takes a special person to turn adversity into success and despair into hope—yet that is exactly what Super Bowl MVP Drew Brees has done—and with the weight of an entire city on his shoulders. Coming Back Stronger is the ultimate comeback story, not only of one of the NFL’s top quarterbacks, but also of a city and a team that many had all but given up on. Brees’s inspiring message of hope and encouragement proves that with enough faith, determination, and heart, you can overcome any obstacle life throws your way and not only come back, but come back stronger.

Download the first chapter of Coming Back Stronger here: